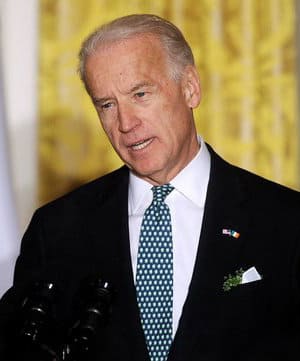 Vice President Joe Biden’s ancestry traces back to the famine years in Ireland when hunger, despair and destitution propelled many of the Irish population to cross the Atlantic in search of a better future.

The ancestry of Jean Finnegan is purely Irish, tracing back to the years of Ireland’s massive emigration at the time of the Great Famine. Jean was the daughter of Ambrose Joseph Finegan and Geraldine Catherine Blewitt, both children of Irish immigrants.

This report is undertaken by Ancestor Network, Ireland’s leading genealogy and family history research firm, genealogical advisor and publisher. This research has focused on the Finnegan Family, Carlingford, Co. Louth and the Blewitt family, Co. Mayo.

Joe Biden’s maternal grandfather, Ambrose Joseph Finnegan. He was born in Pennsylvania, the son of Owen Finnegan and Jane Boyle.

According to his death record, Ambrose Joseph Finnegan was born on 11 July 1885 in Olyphant, Lackawanna County, Pennsylvania, USA to James Finegan and Catherine Roche. To confuse matters Ambrose was living with his Uncle, Peter Roche, [Catherine’s brother] in the 1900 census. Unfortunately, the 1890 census did not survive.

Unfortunately, no townland addresses are recorded in the local Parish baptism or marriage registers. However, the Finnegan family are believed to have originated in the townland of Whitestown (4). It being traditional at the time for the firstborn son to be named after the paternal grandfather, it is noted that the first son of Owen and Jane was called James. In 1833, the Tithe Applotments , Whitestown, records James (as well as a John, Patt, and Bernard) Finnegan on the Brabazon Estate in Whitestown

Owen Finnegan was born c.1820 and no record of his baptism has been identified. The Carlingford Parish Registers record the baptism of Bid (Bridget) Finnegan on 24 November 1811 to James Finegan and Mary Murphy, Whitestown. (5)

Twenty four year old Owen Finigan (sic.), a shoemaker, arrived in New York on 26 February 1849 aboard the S.S. Isaac Wright. (It has been incorrectly recorded elsewhere that Owen Finnegan travelled aboard the S.S. Brothers in 1849 (6)).

The Federal Census of 1860 (8) records Owen Finnegan, a shoemaker and Jane Finnegan in Ovid, New York with five children, the eldest being James (19, b.c.1841, recorded as being blind).

Owen Finnegan died on 15 June 1875 six months after the death of his wife, Jane Boyle on 23 December 1874 (9). They are buried in Holy Cross Cemetary, Ovid, Seneca County, New York.

Edward Blewitt was a member of the Pennsylvania State Senate and was born in New Orleans, Louisiana, to Irish parents from Co. Mayo, Patrick Blewitt and Catharine “Kate” Scanlon.

Edward Blewitt recorded that he was born on 2 January 1859 in New Orleans, Louisiana when he travelled aboard the S.S.Voltaire from Halifax, Nova-Scotia to Philadelphia in July 1924 (10).

The ‘Who’s Who in Pennysylvania’ (11) recorded that Edward Blewitt married Mary Ellen Stanton in 1879 and had four children, Patrick Robert, Arthur, Mary Gertrude and Catharine Geraldine. Following the death of Mary Ellen (in 1887), he married Anne M. Blackwell in 1891. Edward had an illustrious career in Engineering and was a State Senator for the 22nd District of Pennsylvania. He was described as a ‘Democrat in politics and a Roman Catholic in his religious faith’.

The US Federal Census of 1870 (12) recorded Edward Blewitt with his parents Patrick and Kate [née Scanlon] in Scranton, Pennsylvania. Patrick Blewitt (40, b.c.1830), a Civil Engineer and his wife, Kate (35, b.c.1835) were both born in Ireland and all children are recorded as being born in Pennsylvania. (Edward Blewitt records that he was born in Louisiana on subsequent Census returns). The maiden name of Kate Scanlon was recorded on the death registration record for Kate’s brother, William Blewitt, in 1918 (13).

Patrick died a widow, in Scranton, Pennsylvania, on 25 Nov 1911. His death record confirmed his parents as Edward Blewitt and Mary Mulderig.

The Blewitt and Scanlon families are thought to have originated in the townland of Rappacastle (15, 16) , North West of Ballina in Co. Mayo (17). The Irish name for Rappacastle is Caisleán na Ropaí, ‘Castle of the Plundering’ (18). Rappacastle belongs to the Civil Parish of Ardagh. It is also likely that Mary Mulderrig also came from the same locality.

The Kilmoremoy Parish Registers record baptisms, marriages and deaths in the town of Ballina and its hinterland. The registers are incomplete and there are significant gaps, particularly in the early years. It is also likely that not all such events were recorded, even within the designated dates (19).

Whilst no marriage record was found for Edward Blewitt and Mary Mulderrig, baptismal records for their son, John (1827) and Mary (1929) placed the family in Ballina Town.

According to the ‘Mayo News’ (20), the family left Ballina for the neighbouring Parish of Ardagh after the birth of Patrick. This move coincided with an outbreak of Cholera in the town of Ballina and this may have been a deciding factor in the move out of the town. Edward Blewitt, a Civil Engineer, was thought to have worked with the Ordnance Survey when it visited Mayo in the 1830s and had been a brickmaker earlier, supplying bricks for the construction of Killala Cathedral in 1827.

It has been speculated that the baptism of Patt Bluet, son of Edward Bluet and Mary Redington on 24 April 1832 in Kilmoremoy may be that of the ancestor of Joe Biden.

This is open to question. Given that the ship’s manifest records Patrick and his sister, Maria Bluett as both being 18 years old and are possibly twins, however no corresponding baptismal record was found for a Mary/Maria to these parents. The information contained also differs to his death record which gives his birth as 4 Apr 1833 and his mother as Mary Mulderig. It is also possible that an incorrect name has been recorded in the baptismal register (21) or an incorrect date of birth was recorded on his death record.

No further genealogical information was found on Kate Scanlon or Mary Mulderrig.

Mary Ellen Stanton, who married Edward Blewitt in 1879, was the daughter of James Stanton and Mary Arthurs.

Both James Stanton and his wife, Mary Arthurs, were born in Ireland, as was Bridget Arthurs.

James Stanton was the great-great-grandfather of Joe Biden and father-in-law of Edward Blewitt.

Ancestor Network is a collective of Ireland’s most experienced genealogical experts in tracing people of Irish Ancestry. Over the years we have provided flexible, cost effective solutions for individuals, groups and legal professionals who seek personal Irish genealogical services. Our genealogy services can be provided flexibly, to almost any scale, and with the broadest possible range of heritage skills.

Lockdown offer – 20% off online genealogy for a limited time